Advice - What is eating my waterlily leaves?

The problem is visual from outside the pond but to find the answer you need to look at or under the affected waterlily leaf. 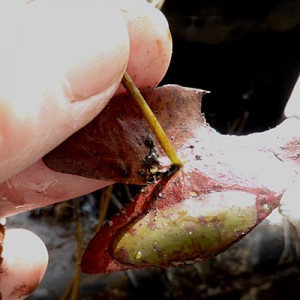 Pupa case on underside of leaf 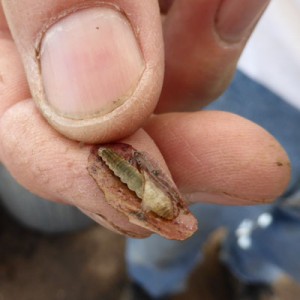 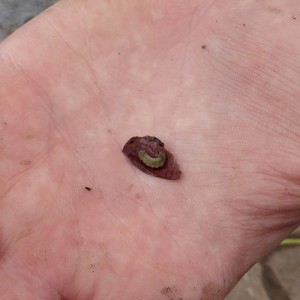 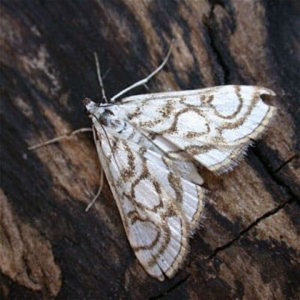 1. Some large neat holes you find on the edge of your waterlily leaves could be a sign of infestation by the caterpillars of brown china mark moth and all the affected leaves should be removed and burned.
2. The caterpillar will cut holes in the leaves on the edges or centrally where the stem joins the leaf. These pieces will be placed on the underside of the leaf to cover the pupa which will develop under its own patch of bitten off leaf.
3. The pupa can be exposed by lifting off the patch. if you are to control this infestation you should destroy the pupa.
4. You are not finding/removing the adult by doing this but you are removing future generations from the pond so this has to be regarded as a long term plan. 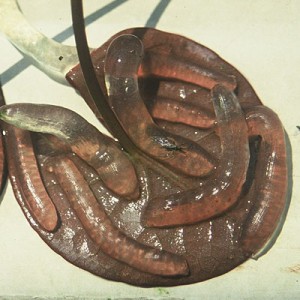 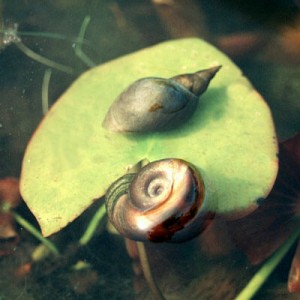 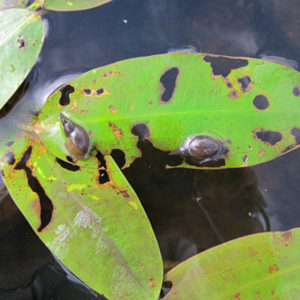 1. Waterlily leaves may also be disfigured by the Great Pond Snail - (the pointed shelled snail not the circular shell of the ramshorn snail). Above is a photo of the jelly capsules containing snail eggs on the back of a waterlily leaf - imagine how fast the snail population can increase with this many jelly capsules on a single leaf.
2. These can be removed from the leaf with a thumbnail to keep the population under control or by removing the whole leaf to the compost bin.
3. To remove snails from your pond - float a juicy lettuce leaf on the water surface and next morning carefully lift it off and you will bring with it lots of pond snails grazing happily.

1. The Waterlily beetle and its larvae eat long slit like holes in waterlily leaves or chew around the leaf edge - the adults are 1/4" long(5mm) and are yellow/brown.
2. They emerge from winter hiding places in nearby foliage in May and lay small white eggs on the top surface of the waterlily leaves.
3. To kill these eggs drown the plant leaves for a few days under the water or spray a dilute mixture of washing up liquid over the infected leaves. (10ml washing up liquid in 250ml water) Apparently a mix of cooking oil in water will do the same job. 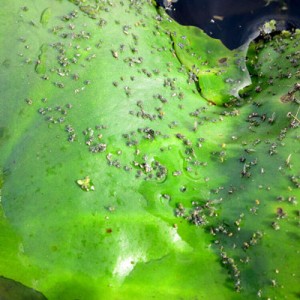 1. Aphids may also affect soft and succulent leaves of the water lily. They are minute - 2mm in size and brown/black and will suck the sap from the leaf.
2. The adults and eggs overwinter on Prunus plants - Cherries, Plums and Blackthorn. They will hatch in Spring until mid summer when they can fly to the waterlily plant.
3. The leaf will become yellow and often distorted which allows the aphids to infest the underside of the leaf too.
4. As the plants are in baskets - drown the aphids by dropping the basket to the bottom of the pond for two or three days.
5. Spray the waterlily leaf with the detergent mixture described above and they will no longer be able to fly or mate but for better long term results spray the host tree in December with Winter Tree Wash by Growing Success or Vitax to reduce the number of overwintering eggs.